It is with a very sad heart that we say goodbye to John.  He was dearly loved by his family, cherished by his many friends and his dedication to the community is a loss that will be felt by everyone who had the privilege to know him.  I can only imagine part of the loss that his family is feeling and pass on our sincere condolences and support.

I met John many years ago when we teamed up to walk our dogs.  I say “our dogs” but really, John was walking his neighbour’s dog as the neighbour did not have time and the dog needed exercise. It was a classic example of the help that John gave without fuss or any strings attached. During these daily walks I not only marvelled at his fitness but also his pride in his family and commitment to the community.

He was a long standing and well regarded member of the Warrimoo Bushfire Brigade.  He held many positons in the Brigade and at all times provided non-judgemental support and wise counsel to all members.  Many of the members referred to John as “father” as a mark of their respect.  The Brigade recognised him as a life member, an award that must be earnt by at least 10 years of meritorious service. John was a more than worthy recipient of this award.

John was an inaugural member of the Cross Street Bushcare and the Long Angle Landcare groups. He regularly attended work days for many years while he was physically able. His dedication and concern for us and the protection of the bushland was appreciated by all. He had a sense of humour that lifted our spirits and we enjoyed his contributions to our conversations at the afternoon tea. We have missed him at the volunteer BBQs held in recent years but still remember his joyous company of past times. I am sure we will continue to contemplate the “good old days” of John’s company of past times for many more years.

There were many other groups that John generously gave his time to. These included the Warrimoo Citizens Association and Warrimoo Tennis Court and Hall Committees. John was also a proud volunteer for the Sydney Olympics. It gave him great satisfaction to reflect on the time that he was the driver for the Israeli athletes and officials. This was a demonstration of John’s character as he enjoyed helping others in need without any expectation of personal reward; the opportunity to help was reward enough. 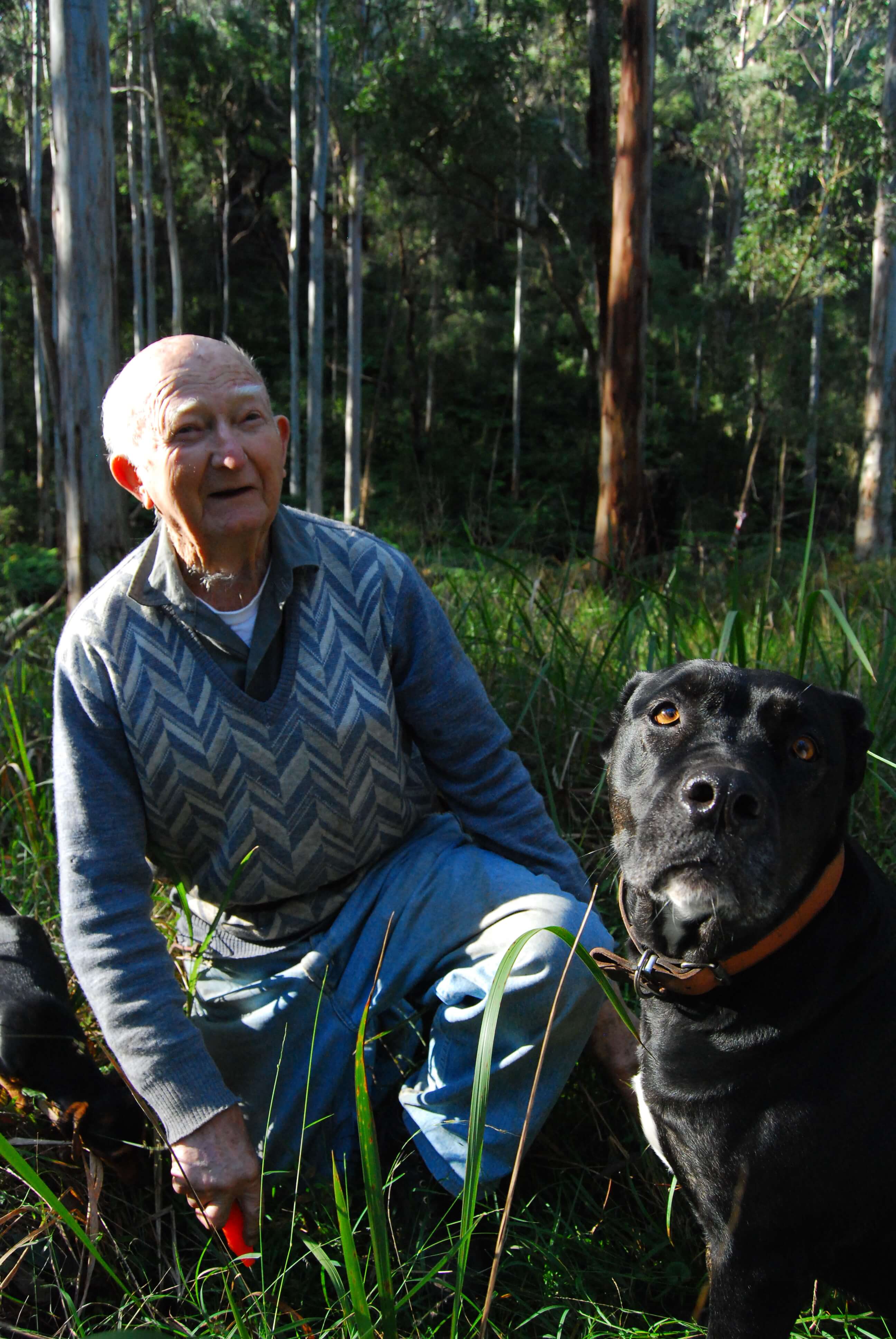 John and one of his many friends

Many probably do not know that John was also a skilful negotiator. On two occasions, as a result of John’s manoeuvring, I ended up owning dogs that I had not bargained for. On the first occasion after waiting for his chance (it was a well-timed manoeuvre) , John suggested that I take a rescue dog home to see if it would fit into the household.  Of course the rest of the story was predictable.  On the second, we were at a BBQ and were trying to convince John and Doreen to take on a dog that a family reluctantly had to give up.  John was too wily a negotiator for us and when my wife Joan, in frustration said that if no one else wanted the dog we would take it on, he made his move.  Before we could change our minds John arranged for the dog to be delivered to us.  Of course he knew we were dog lovers and that they would be well looked after.  He also knew we were in need of the dogs and so, while he was quick to strike, he also knew that both the dogs and us would benefit from his match making.  These ordinary examples of John’s insightful and compassionate nature are a tribute to his character and my fond memories of him.

I have treasured memories of the afternoons that Joan, Doreen, John and I spent relaxing on his porch in pleasant conversation while watching the happenings in the street.  John would occasionally greet passers-by and some would call in to catch up.  John loved Warrimoo and was surrounded by many dear friends who have had the good fortune to have a shared the life of a modest, genuine, caring man.

To respect John’s legacy, we should strive to continue with his high standards of commitment, compassion, practical help and loyalty that was at all times willingly volunteered. This is the very least that we can do to honour a very dear mate.