A faint woo-hoo echoed through the gully followed by others at roughly ten-second intervals. I smiled, as I slowly descended the gently sloping track into the gorge towards the nest tree, where a pair of Powerful Owls (Ninox strenua) were about to begin their annual courtship ritual. Soon, the owl was joined by his mate.

With a little practice, telling a male and female Powerful Owl apart can be relatively simple. The second note of the male’s woo-hoo is generally lower, or the same pitch as the first. On the other hand, the female’s call has a higher second note. My pair near the town of Glenbrook has a very passionate female, whose second note is usually much louder in volume too, as if she were calling with enormous passion for her mate.

Nesting begins in late autumn /early winter inside large tree hollows. Chicks (called owlets) usually emerge from their nest hollows during late July and into the month of August within the Sydney region.

Adults first start roosting together or near each other during March/April and come late afternoon, often well before sundown, they begin calling. This is usually initiated by the male and answered by his mate. Soon, they fly onto their favourite rendezvous perches, usually within sight of their chosen nest tree, and begin calling, then preening themselves.

They preen themselves first usually, stretch and defecate, then allopreen. That is, they preen each other. This allopreening is usually of the head area and is done with utmost love and care. It is a wonderful sight to see owls — known as fierce and merciless killers of night creatures — being so kind, loving and gentle with one another. At least so it seems to an amateur naturalist like me. Ornithologists would frown at my statements using human emotions. However, I like to interpret my own observations into the language of normal folk, so they can share the excitement with me, rather than be bored to tears with mundane observations.

Powerful Owls are the largest of the Australian owls. They are members of the Strigidae (hawk owl) family, as are Southern Boobook, Barking Owl and Rufous Owl. Once any of these owls turn side-on, you’ll notice the resemblance to hawks, hence their apt descriptive hawk owl name. Powerful Owls range from around Bundaberg in Queensland to western Victoria. Some of the densest populations occur near metropolitan areas of Sydney and Melbourne, with the NSW alpine regions and the NE NSW coastal forest areas having dense populations. 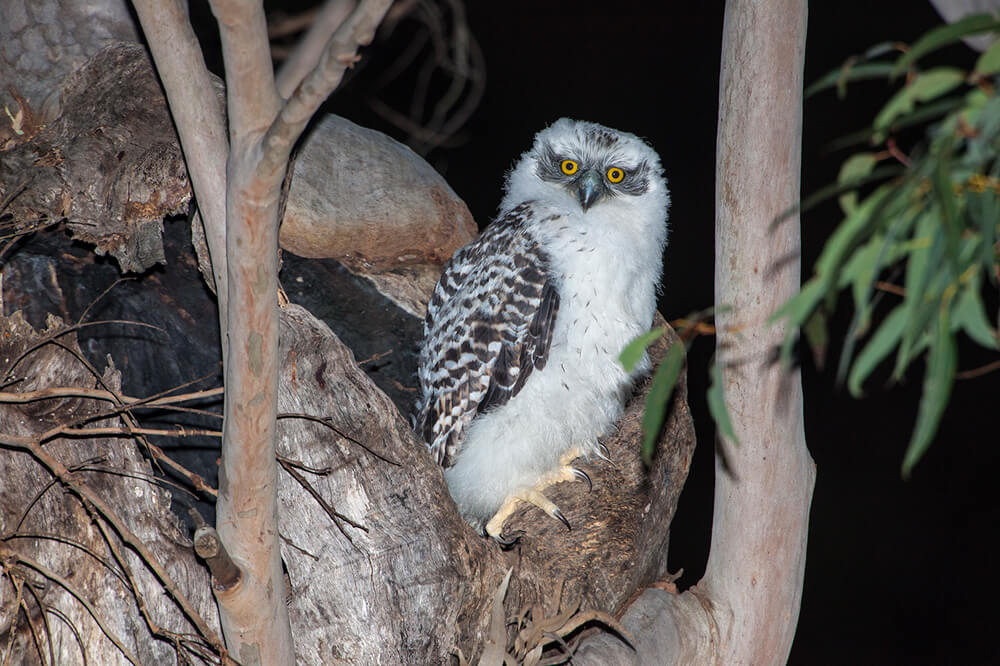 The owls range inland as well, about as far west as the Pilliga State Forest in NSW. Their home range estimates vary mostly due to the density of prey species (the availability of prey). Some home ranges have been estimated as low as 300 hectares with a high prey density, whereas I have also read that some home ranges can be several thousand hectares in low prey density forests.

On average, the home range is around 800 – 1,000 hectares, except urban areas, where the ranges can be far smaller. Areas like Epping, in Sydney’s northern suburbs, can hold three or more pairs along a few kilometres of walking tracks inside the national park bordering suburbia. Here, there are lots of birds, possums and gliders for the owls to feast on.

Powerful Owls often roost in cool, temperate rainforest gullies along creeks, especially during the heat of summer. However, their nest trees may be located well up along a ridge, away from the cool of the rainforest. Also, since the owls nest during winter, it is less likely that heat stress would be a risk factor to the young, developing, owlets inside the tree hollows.

The owls’ nests are usually in some of the oldest, tallest, gum trees, which means that it is vital that we maintain pressure on local governments and other agencies to ensure we protect old-growth forests. Without these very old trees (some over 100 years old) and their hollows — which could take decades to form — many of our natives would be in serious trouble in the not too distant future.

Powerful Owls often share roosting and hunting areas with Sooty Owls, since both species have a preference of the same habitats and similar prey species.

Powerful Owls have their preferred prey items, but each locality may ‘force’ the owls to prey on particular species that may be more abundant in that territory. Greater Gliders, Yellow-bellied Gliders, Grey-headed Flying Foxes, Sugar Gliders, Common Ringtail and younger Common Brushtail Possums are all fair game, as are many larger birds from about lorikeet size up. Most owls I’ve seen in the Sydney basin have had Common Ringtail or Common Brushtail Possums in their talons when I saw and photographed them. Rarely have I seen them with other prey.

However, since I have been observing the breeding pair near Glenbrook, I have noticed a higher number of bird prey items than mammals.

Of course, since I was not at the other owls’ roosts every day of their life, I only have a small sample of times and observations. I have far more data and observations (over 120 hours now) at Glenbrook which indicates that my owls prey on birds about half the time. I have many pellets to analyse, but when I found them bringing prey to the nest, they were mostly Common Ringtail Possums, Laughing Kookaburra and possibly Tawny Frogmouth.

Indigestible body parts and fur are regularly regurgitated as pellets by these owls at their roosts. Some of the pellets contained mandibles and bones from possibly Sugar Gliders and there were lots of parrot feathers too and other matter. I would suspect some of the birds to be Crimson Rosellas and Rainbow Lorikeets based on the type and colour of feathers and Pied Currawong or Australian Raven, based on the larger black feathers.

It is very humbling to gain the trust and acceptance of a pair of owls and study them as they go about their lives. Even more humbling is that I have now seen two young birds crawl out of the very same hollow during two consecutive winters.

Interestingly, while some owls raise two owlets, my pair has only raised one per year since the 2013 season when I began to study them.

If you are interested in making contributions, you too can join the Sydney Powerful Owl Project, which was the brainchild of Kristen Hardy. She was so captivated and obsessed with seeing these owls in her Northern Beaches backyard, that she collaborated with Birdlife Australia and the project was born as a pilot project in 2011.

Initially, Dr Rod Kavanagh, Australia’s best known owl research scientist estimated that there would be about 20–30 territories in the Sydney basin. By the end of the 2012 breeding season, the volunteer project members had helped establish 47 known territories, nearly double Dr Kavanagh’s original and conservative estimate!

To join this exciting volunteer project, e-mail powerfulowl@birdlife.org.au and the kind folks at Birdlife will get back to you. They hold orientation workshops/talks in different areas around Sydney and Newcastle/Central Coast areas.

Here is a gallery of Akos’s photos and more information.