An opportunity to continue the long term efforts of volunteers to keep improving this large swamp system that needs help to reverse the impact of many varieties of weeds.  A known site of two threatened species, Giant Dragonfly and the Blue Mountains Water Skink.

This is a joint NPWS and BMCC activity.  Lunch and morning tea donated by Hominy Bakery.  Please book by the 3rd September with Edward on 4780 5623 or ebaylisshack@bmcc.nsw.gov.au . 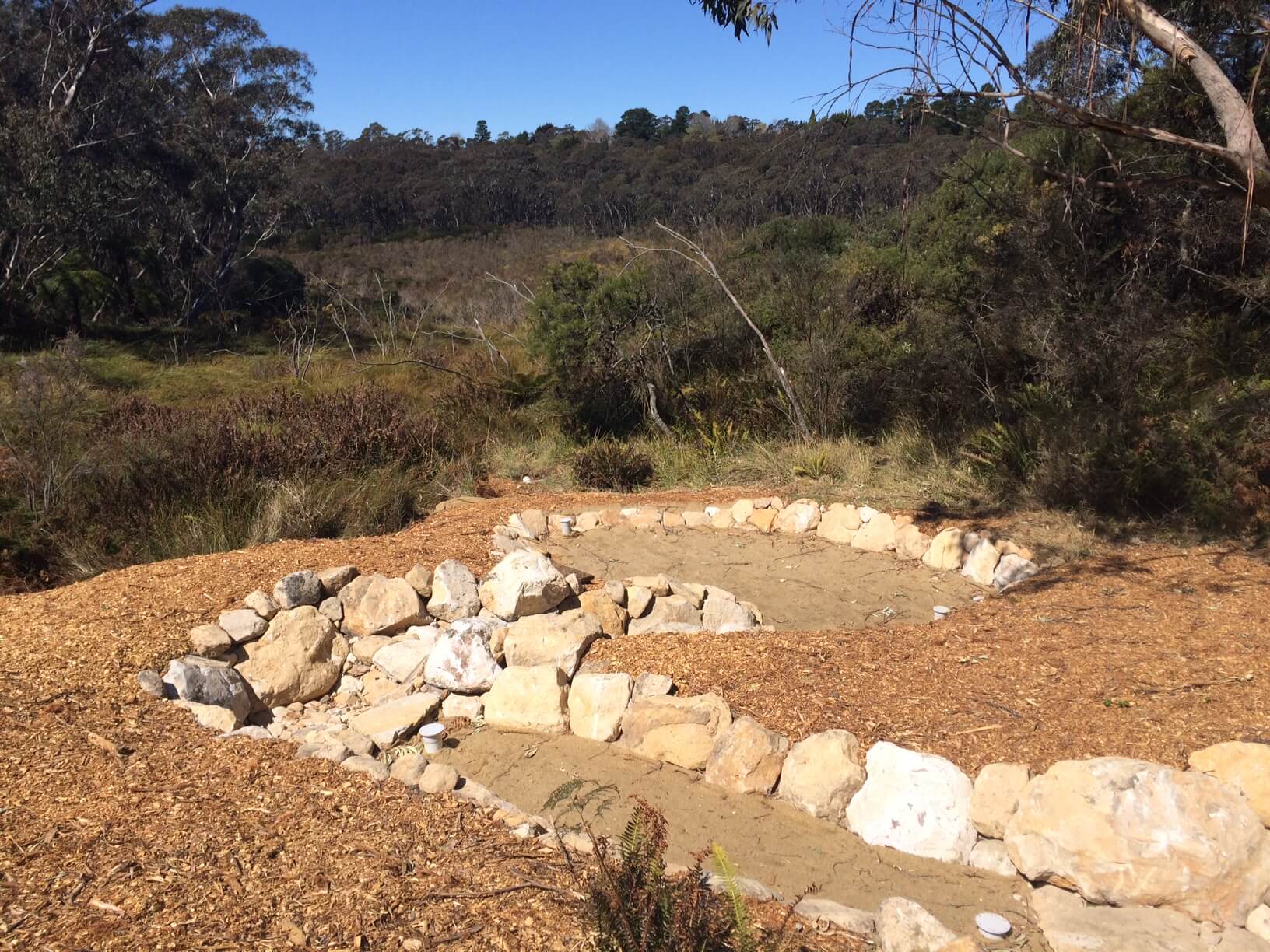 Council has partnered with Water NSW and the Environmental NSW Trust “Swamped by Threats” program to fund the installation of bio-filtration systems for storm water entering Wentworth Falls Lake.

These bio-filtration systems are designed to catch nutrients such as nitrogen and phosphorus, significantly improving water quality.  The system includes a treatment train of settling ponds for catching silt, multi layered filtration basin and a sandstone rock armouring, which has been repurposed while excavating the waste cell at the Blaxland Resource Recovery and Waste Management Facility.

Decreasing this nutrient load also helps to reduce the spread of weeds, which can push out local native plants and reduce swamp biodiversity.  The swamp is an Endangered Ecological Community and home to several threatened species including the Giant Dragonfly and Blue Mountains Water Skink. Swamps play a vital part in water management as they store water and release it slowly over time in the creeks and streams.

Dear Bushcare, Swampcare, Landcare and others interested in caring for our bushland.  This issue of Gecko is being prepared in the midst of incredibly wet days so it is only fitting that it be full of swamp-related news! We’re celebrating ten years of Swampcare this year, and so a big thank you to Lyndal for the articles and for the immense amount she has contributed to developing our Swampcare volunteer program. Lyndal’s passion, skills and experience are a large reason for the success of the volunteer program and her ongoing commitment to making sure the Blue Mountains Swamps get the protection they so rightly deserve is to be congratulated.

Also to be congratulated are our BMCC Senior Citizen award winners— Erst Carmichael, Paul Vale, Roger Walker and Rae Druitt. Those of you who know them will not be surprised that they have been recognised in this year’s Senior Citizens Awards, and those who don’t can find out more inside.

And while we’re on the subject of awards, this year’s Bushcare awards will be announced at our annual “Thank You Bushcare” picnic in the Megalong Valley on Saturday 29 April. The bus will be available for those requiring transport, there’ll be food, good company, congratulations and for the first time this year we are adding on a Biodiversity Camp and Survey. I hope to catch up with you there, or at Bushcare!

– Monica, for the Bushcare Team 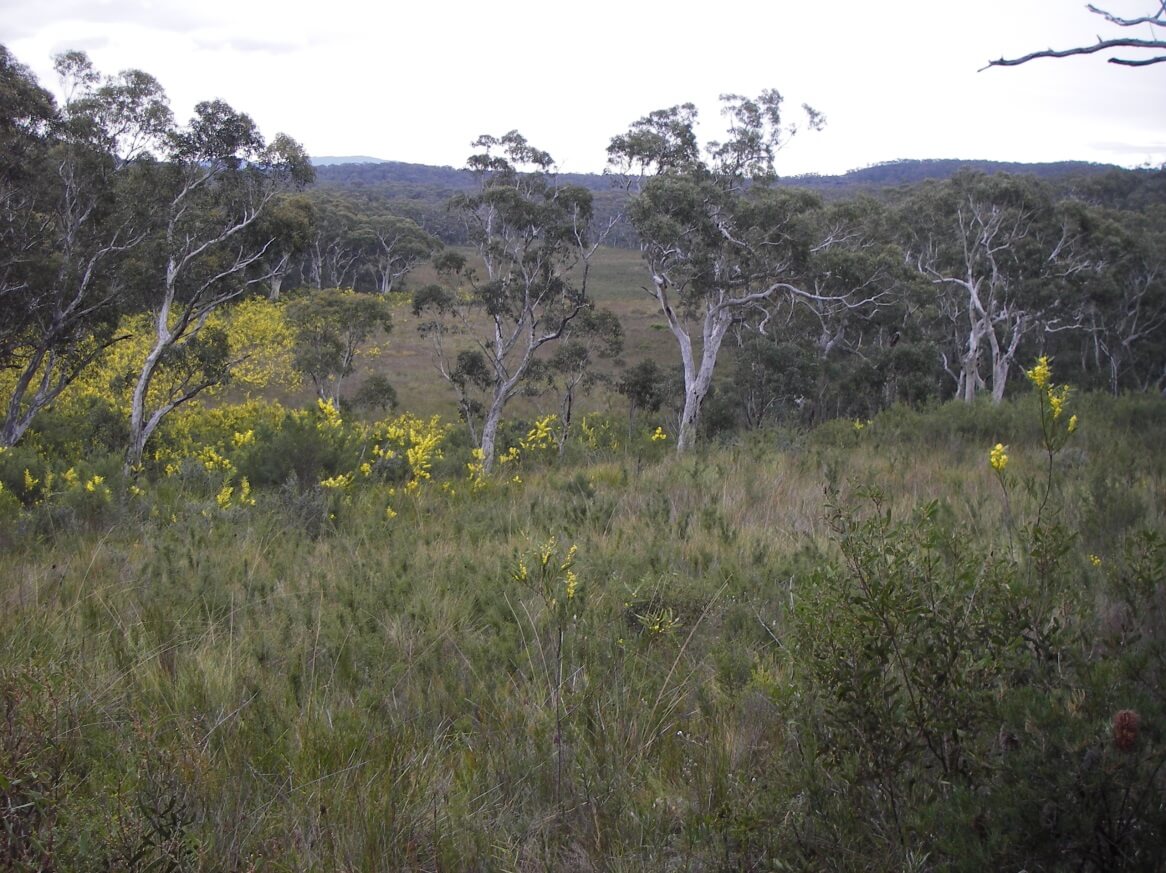 Swampcare is celebrating its 10 year anniversary this year!  From the first on ground workday at Kittyhawke Swamp in North Wentworth Falls in March 2007 Swampcare has grown into an annual program of events in the Blue Mountains run by Council’s Bushcare. Swampcare provides opportunities for volunteers to learn about swamps and the special requirements of undertaking bush regeneration in these sensitive places as well as making hands on contributions to protecting them.

Many workshops have been held over the years to add to the knowledge of volunteers covering swamp ecology, vegetation, threatened species and  techniques to rehydrate swamps. A Swamp Symposium will be held on Wednesday 21st June  to celebrate and continue developing community knowledge, thanks to people such as Dr  Ian Baird, who has very generously given his time and shared his knowledge by regularly presenting workshops.

Over the 10 years more than 2000 volunteer hours have been contributed in on site works.  Many thanks must also go to Hominy Bakery in Katoomba who have been donating delicious lunches and morning teas for volunteers at every event since 2007. A much appreciated incentive to keep coming back! 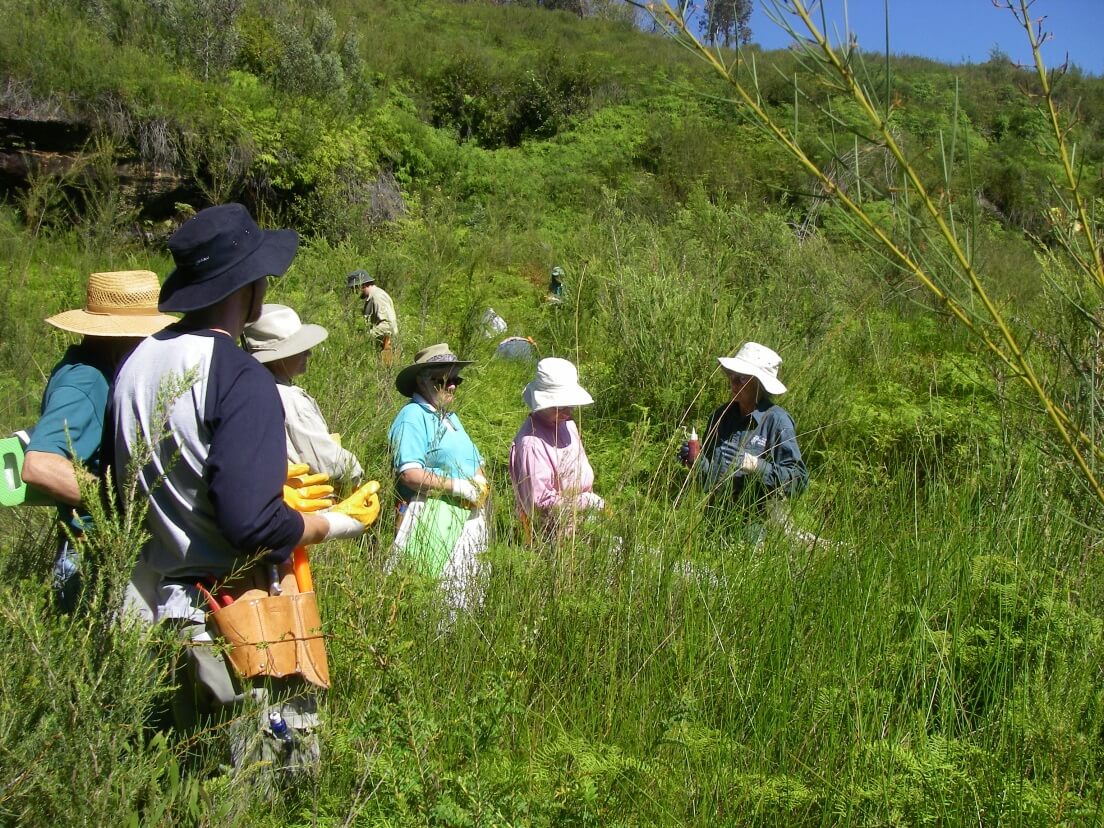 Sites currently worked by volunteers in the Swampcare events program are:

In addition to the Swampcare events program, there are 15 other Bushcare or Landcare groups which also work in swamps and/or their buffers at some stage during each year.

There are 2253 hectares of swamp mapped in the Blue Mountains with 929 of those outside the National Park.  Swamps within the urban area are recognised as being the most vulnerable to degradation,  a concern which is being addressed by this program.

According to recent recorded history, scientific and management interest began in swamps in 1974 with the PhD by WN Holland entitled ‘Origin and Development of Hanging Valleys in the Blue Mountains, NSW’; which showed the significance of the geomorphology on formation and maintenance of hanging swamps.

After witnessing a number of destructive developments occurring within and around swamps, in 1999 community members, under the banner of the Blue Mountains Conservation Society, began working to gain legal protection for swamps.

In September 2007, after 8 years of hard work, Blue Mountains Swamps were listed as a Vulnerable Ecological Community under the NSW Threatened Species Conservation Act (TSC Act). In order to achieve this, 3 other significant achievements were made:

For a more detailed history and swamp images see http://bluemountains.org.au/swamps.shtml

Since the listing in 2005, Blue Mountains City Council has obtained over a million dollars in grants from state and federal agencies to protect the swamps. BMCC’s ongoing Save our Swamps program is currently partnered with Central Tablelands Local Land Services to deliver a 10 year $750,000 “Swamped by Threats” grant. This aims to continue protecting the swamps of the Blue Mountains and Newnes Plateau with a focus on swamps that are known habitat for the endangered Blue Mountains Water Skink and the Giant Dragonfly.

Swampcare is a vital component of the concerted effort by BMCC and the Blue Mountains community to protect its valuable swamp systems. Our swamps continue to need all this community support  – hands on swamp restoration work, watching  and reporting illegal activity, writing submissions on potentially damaging developments, and campaigning to strengthen legal protections and ‘buy back’ swamps.

New members are always welcome to join the Swampcare program, just contact the Bushcare office on 4780 5623!

April 2007: Hard at it in Kittyhawke Swamp, Wentworth Falls. Photo by Michael Hensen 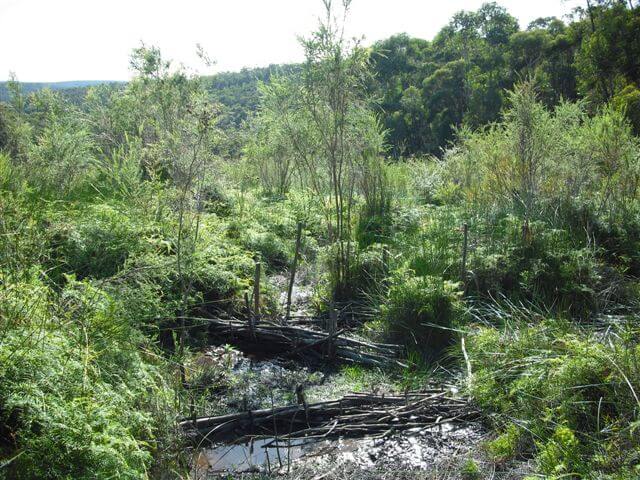 Join the long term efforts of volunteers to free this large swamp system of a huge variety of weeds and restore the habitat of the Giant Dragon Fly and the Blue Mountains Water Skink.  A joint NPWS/ BMCC activity.  Lunch and morning tea donated by the Hominy Bakery. Book with Lyndal on (02) 4780 5623 or lsullivan@bmcc.nsw.gov.au by Tuesday 21st March. 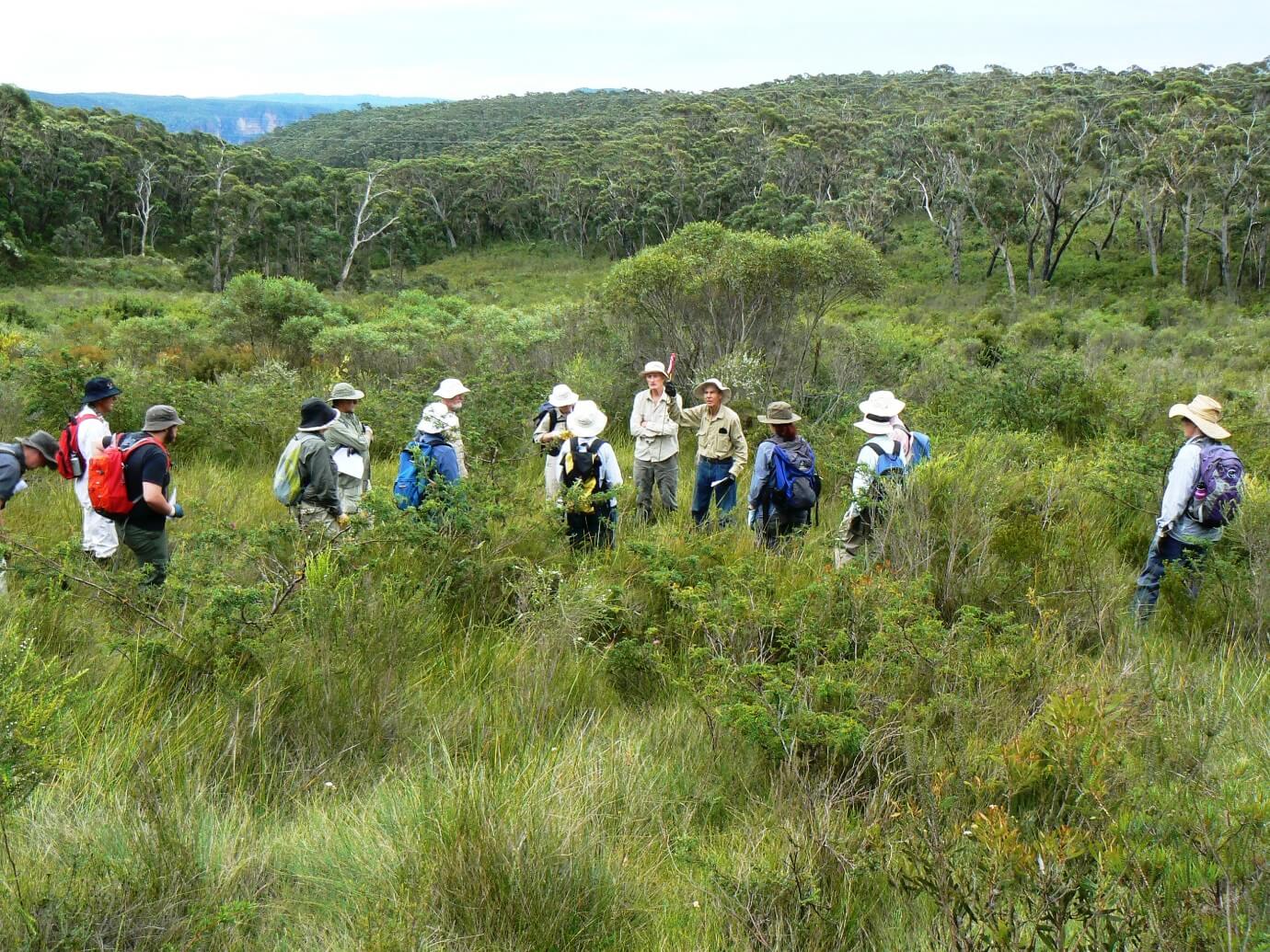 A Blue Mountains Swamp near the airfield at Medlow Bath — in its flowering glory — attracted an  enthusiastic group of Swampcare volunteers to a field day in January 2017. The field day was part of a 10 year project to protect swamps, called “Swamped By Threats” whose partners include Central West Local Land Services, Blue Mountains City Council and National Parks and Wildlife Service.

The volunteers enjoyed a morning packed with information and good food topped off by a sighting of Blue Mountains Water Skinks – a well deserved reward for all their work during 2016! Unfortunately, the hoped for Giant Dragonfly did not make an appearance … this was not a good year for their emergence.

Two eminent swamp experts were on hand to generously share  their knowledge deepen our understanding of swamp plants and animals and their dependence on groundwater. Doug Benson is a highly respected plant ecologist and Honorary Research Associate with the Royal Botanic Gardens Sydney. He has studied swamps of the Blue Mountains and Newnes Plateau for more than 40 years, satisfying his curiosity about how and when they developed. Ian Baird drew on more than 13 years of research on the threatened Giant Dragonfly and swamps generally, to share his extensive knowledge of the fauna that dwell in them.

Our current swamps formed up to 15,000 years ago as the land warmed up and became wetter after the last Ice Age.   How the unique swamp plants formed and where they were during these cold and dry periods are particular questions of interest.

Flowering shrubs such as the rare Acacia ptychoclada and Grevillea acanthifolia were admired along with sedges such as Empodisma minus and Xyris ustulata. Two of the shrubs present in swamps, Banksia ericifolia and Hakea teretifolia, are killed by fire because they do not resprout from a lignotuber and do not store seed in the soil. Individual plants can take up to 8-10 years to flower and fruit and even more years are needed between fires to establish a seed bank to ensure the continuation of viable populations of this species in this location.

Plants adapted to sandstone areas only drop seeds close to the parent plant, which is in contrast with northern hemisphere plants where seed moves much greater distances due to reliance on wind dispersal. The presence of Mallee eucalypts in swamps may be understood in terms of opportunities to thrive without the competition of larger trees. Adapted to wetter conditions and fire, some of these Mallees have lignotubers at least 50-100 years old.

Using a 1.8m steel soil probe, Ian demonstrated the significant differences in the depth of soft peaty soil over the swamp and the patches of drier sandy loam. These soil differences are reflected in the plants, and determine where Giant Dragonflies can reproduce.

Ian identified patches suitable as breeding habitat and those which were not, and discussed the importance of damp or saturated peaty soil with a high water table for egg-laying and larval establishment.  It is believed that they then spend at least 6 years in their larval burrow. The deepest larval burrow Ian has found, also the deepest recorded, was 75cm.

A very young Blue Mountains Water Skink, plus two adults were sighted. One adult water skink sat still on top of the grass watching the group for some time. Genetic studies indicate that this species has been in swamps in the Blue Mountains for at least 2 million years, but where were they during the ice ages which have occurred over that time? They are currently solely dependant on peat swamps in the mid-to upper Blue Mountains for their survival. 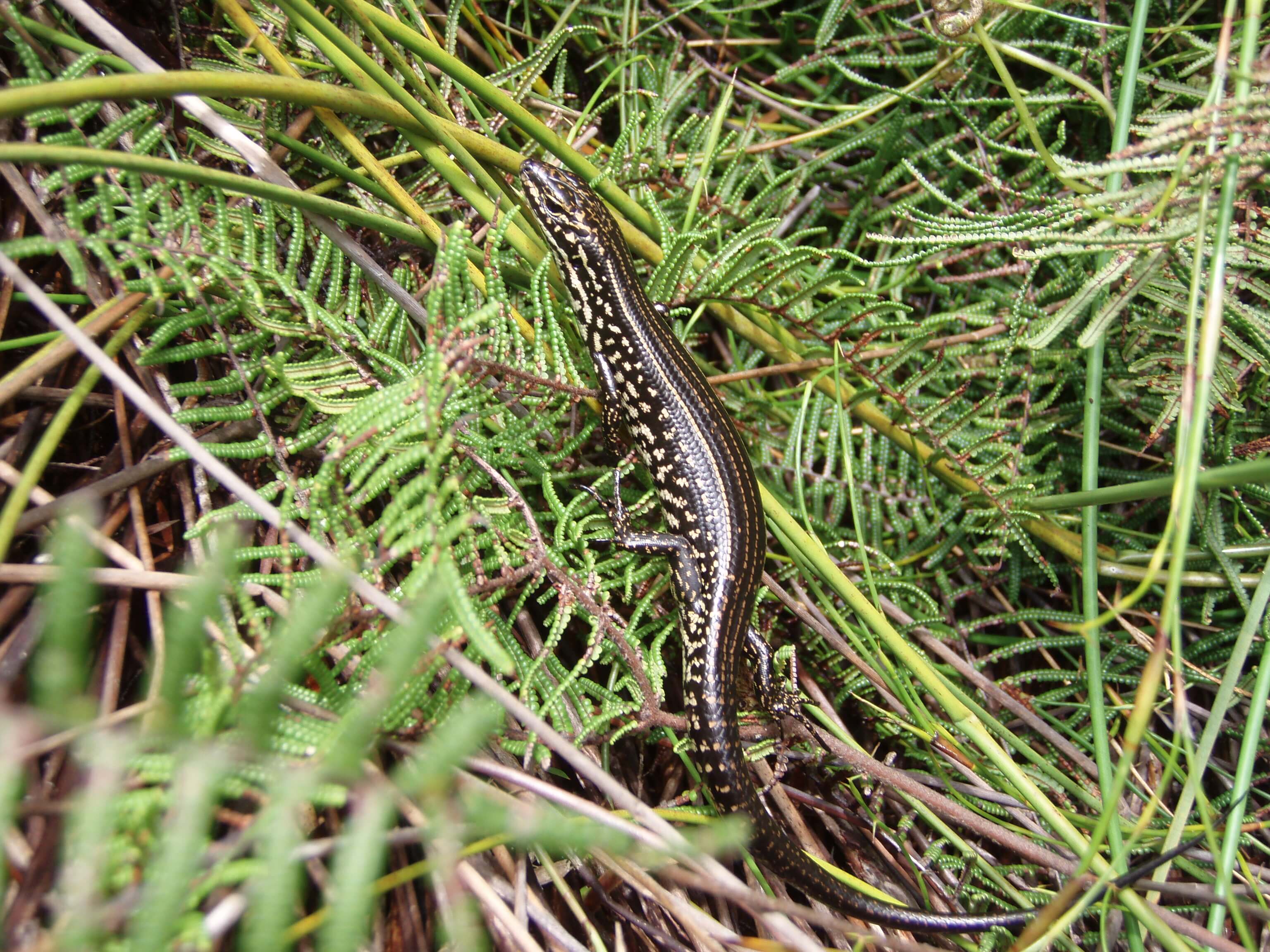 Ian gave some insights into the range of less appreciated fauna found in swamps which also need groundwater for survival, from the small invertebrates and skinks which may survive fire under patches of wet litter, to the Common Eastern Froglets, burrowing crayfish and swamp rats. Blue Mountains Water Skinks can sometimes use these burrows, and those of Giant Dragonflies, for protection from fire and predators. Crayfish burrows are found in areas with groundwater seepage or a high water table which they can access in their burrows. Swamp rat tunnels may also be abundant; one of which was inspected (these are more horizontal).

Both Doug and Ian explained how Blue Mountains Swamps are important for holding and filtering water. The conservation of swamps is a key concern of those present and an interesting debate on fire, sedimentation and climate change followed. The predicted hotter, drier conditions and more frequent fires will threaten the swamps’ survival.

Come for the day or just the morning. Help us get this swamp back into shape. It forms part of the extensive Braeside Upland Swamp located in the headwaters of Govetts Leap Brook which flows over Govetts Leap Falls just downstream.  Enjoy a delicious morning tea and lunch donated by the Hominy Bakery.

Help the Garguree Swampcare Group with a restoration planting morning along the riparian corridor connecting the Blue Mountains Water Skink populations of the McCrae’s Paddock swamp and the Gully swamps.

For those who may be interested in doing some planting and weed control at Katoomba Christian Convention, just a heads up about our working bee coming up on Saturday 28th May – we’d love to see you there if you can make it! Free accommodation and food provided!

Bushcare professional Jenny Schabel will be guiding us with some native plantings and garden developments, plus a bit of weed management.
More info and how to sign up is on the link here: Working Bee