Native Orchids of the Blue Mountains features over 125 species of native orchid that occur within the Blue Mountains Region, with over 500 photographs.  This intends to aid in the identification of native orchids, and help document and record what currently exists within one of the most botanically diverse regions on the East Coast of Australia. You can purchase your copy at NPWS Heritage Centre, Blackheath, or by contacting the authors:   bluemountainsnativeorchids@gmail.com

The book has also been listed on ebay.

Sabine Hanisch and Ben Jasiak also have a Facebook page that includes some stunning photos of local native Orchids. https://www.facebook.com/BlueMountainsOrchidsbySabineHanischandBenJasiak/?__tn__=%2Cd%2CP-R&eid=ARDKDBPmGMfgd1Sqx5Cqk0jnAxIPthY0273ISPKkpAjLoGDaFrCpzBZpFilYvghc9vpcnj2_dWF_ZilD –

An interesting post on that Facebook page comes from an article from the “Sydney Morning Herald” about Sabine and Ben’s eight year old Daughter Arabella finding a rare Orchid that has not been seen for over 140 years.  The full article is via the link below:

In that article there is mention of “Bush Blitz” – an excerpt from the article is below:

The multi-billion-dollar project (“Bush Blitz”) began in 2010 and has uncovered thousands of new species. Before the COVID-19 pandemic, Bush Blitz would join taxonomists, Indigenous communities, park rangers and local councils across the country to explore remote parts of Australia and classify new species.

Since the COVID-19 social distancing regulations came into play the project has had to think creatively to motivate discoveries virtually.

Using the app iNaturalist Bush Blitz is providing every day Australians with the opportunity to have their discoveries analysed and verified by the country’s best taxonomists. After an individual’s discovery is verified by one of the experts on the app the data is categorised in the Atlas of Living Australia as a new species.

Their aim during COVID-19 is to nurture curiosity through technology “we want to help teachers and parents to motivate children to behave like scientists in the field and discover things in their backyards” she said.

“Adults have often lost the ability to wonder in awe. The way that children look at the world as if everything is new and worth examining is exactly how discoveries are made,” she said. “We finally have the technology to tap into that lack of expectation and nurture that quality.”

More information on Bush Blitz is available via https://bushblitz.org.au/ 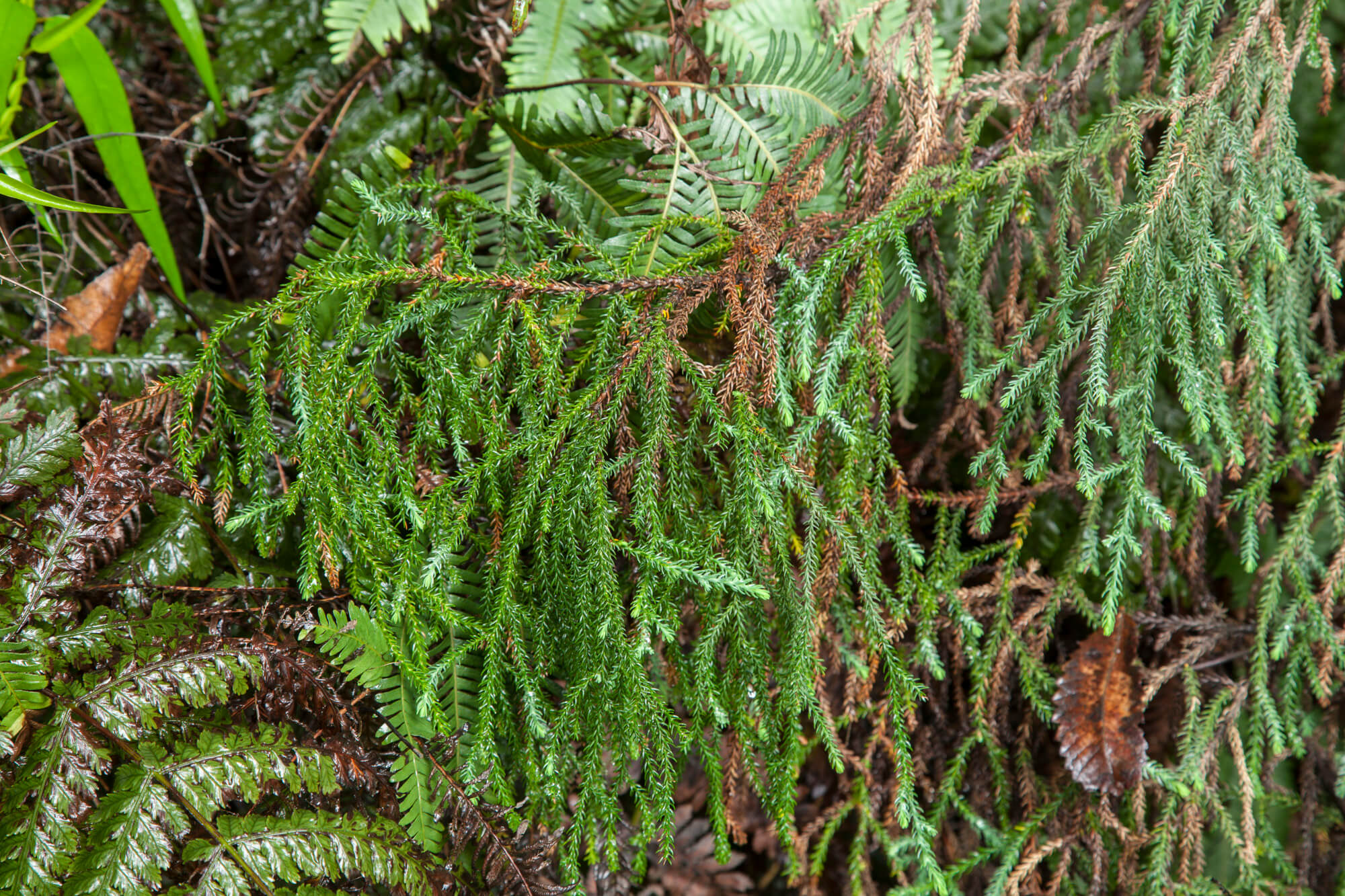 Protecting the Wentworth Falls population of the endangered Pherosphaera fitzgeraldii  from the very invasive Montbretia was the name of the game for our Jamison Creek Catchment Care Day this year. It was well received by some keen Bushcare volunteers, BMCC Bushland Operations Team (Bushcare Officers and Bush Regeneration Officers) and the NPWS Ranger for the Jamison Valley.

Having 2 extra Bush Regeneration team members involved for the first time meant we could divide into smaller groups and cover more of the creekline as well as share information about the management of the whole area while we worked.

One group met at Wentworth Falls Car Park, walked to the top of Wentworth Falls and then worked upstream (wading where necessary) to follow up woody weeds in the area worked last year.

The other groups met at the corner of Jamison and Fletcher streets, kitted up and after a short walk down to the creek, with some walking further down the Charles Darwin Track, started target ting Montbretia around the pools and cascades and all woody weeds and the along the track and creek banks. All three groups re-united for lunch and informative talks on the creek bank.

Montbretia is slow going so although the distance covered wasn’t huge, we removed lots of corms and enjoyed the beautiful weather and surroundings while we worked. There was lots of opportunity to discuss the creek condition, learn about the endangered Dwarf Mountain Pine (Pherosphaera fistzgeraldii). 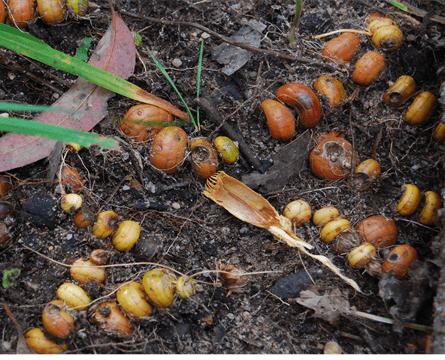 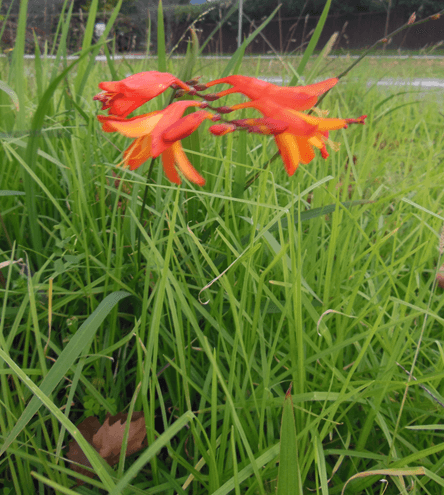 Another target weed in this catchment is Erica lusitanica (Spanish or Portugese heath, often referred to simply as “Erica”, a woody shrub which has a similar appearance to native tea trees so is often mistaken for a native. Both Montbretia and Erica have the potential to establish in the rocky crevices on the cliffline adjacent to the waterfalls – taking up the space where Dwarf Mountain Pine grows. Annual Catchment Care Days are a valuable contribution to the ongoing work of Council’s Bushland Operations Team, contractors and the volunteer Bushcare Groups. Charles Darwin, Jamieson St Landcare, Wentworth Falls Lake, Water Nymphs Dell and Valley of the Waters groups were all represented this year and together we not only dealt with Montbretia and Erica but as Tutsan, Japanese honeysuckle and Small-leaf Privet as well.

Jenny Hill from Council’s Healthy Waterways Team delivered a very informative talk about the issues affecting the water quality of the catchment and the work underway to improve stormwater management.

Good food, good company and good work resulted in a very enjoyable and productive morning – made possible through funding from the NSW Office of Environment and Heritage “Saving Our Species” program. A huge thank you to SoS and the dedicated volunteers of Wentworth Falls!

The Blue Mountains Bushcare Network is a core group of dedicated Bushcare Group co-ordinators and volunteers. We meet quarterly to keep up to date with whats happening in the world of Bushcare, raise issues of concern, support each other and plan education and information sharing events.

We also collaborate with Council regarding plans for the Bushcare program as well as look for resolutions to environmental issues affecting Blue Mountains bushland reserves.

This meeting will be largely occupied with planning our next Bushcare Bioblitz Conference, scheduled for Saturday July 29. If you’re interested in being part of the Conference organising committee please contact the convenor of the Network, Paul Vale paulvale@ozemail.com.au

Dear Bushcare, Swampcare, Landcare and others interested in caring for our bushland.  This issue of Gecko is being prepared in the midst of incredibly wet days so it is only fitting that it be full of swamp-related news! We’re celebrating ten years of Swampcare this year, and so a big thank you to Lyndal for the articles and for the immense amount she has contributed to developing our Swampcare volunteer program. Lyndal’s passion, skills and experience are a large reason for the success of the volunteer program and her ongoing commitment to making sure the Blue Mountains Swamps get the protection they so rightly deserve is to be congratulated.

Also to be congratulated are our BMCC Senior Citizen award winners— Erst Carmichael, Paul Vale, Roger Walker and Rae Druitt. Those of you who know them will not be surprised that they have been recognised in this year’s Senior Citizens Awards, and those who don’t can find out more inside.

And while we’re on the subject of awards, this year’s Bushcare awards will be announced at our annual “Thank You Bushcare” picnic in the Megalong Valley on Saturday 29 April. The bus will be available for those requiring transport, there’ll be food, good company, congratulations and for the first time this year we are adding on a Biodiversity Camp and Survey. I hope to catch up with you there, or at Bushcare!

– Monica, for the Bushcare Team

The Sublime Point Bushcare Group (SPBG) in Leura celebrated its 20th Birthday on 11 January 2016. Since 1996 the Group has transformed, with the aid of a number of small grants, a six hectare Reserve in south Leura that had previously been seriously degraded over a substantial fraction of the total area. That part of today’s Reserve is now a flourishing native landscape. The whole Reserve is crisscrossed with walking tracks that have been engineered to reduce erosion.

Over the 20 years the Group has eradicated an impressive list of 33 weeds, including Buddleia, Tree Lucerne, Portuguese Heath, Holly, Privet, Monterey Pine, White Poplar, Lombardy Poplar, Pussy Willow, Chinese Elm, Watsonia and Yucca. But we still have difficulty with St John’s Wort, Catsear, Blackberry and a host of imported grasses.

The Group has a vibrant core of half a dozen dedicated bushcarers, augmented from time to time with other local residents. Most of them appear in the accompanying photograph. 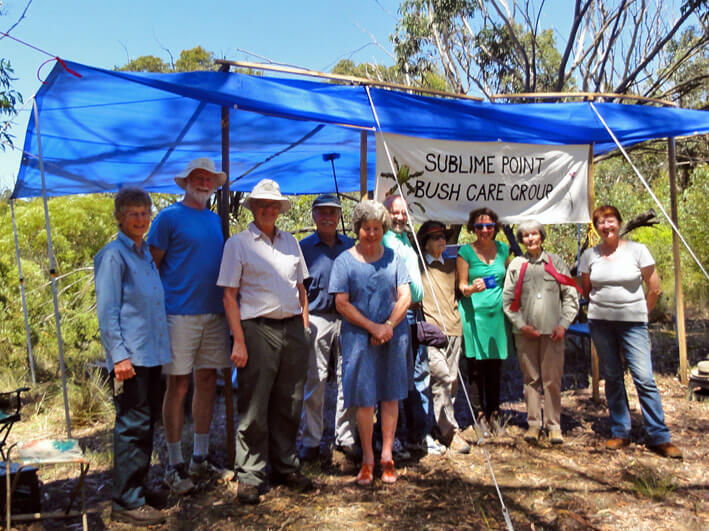 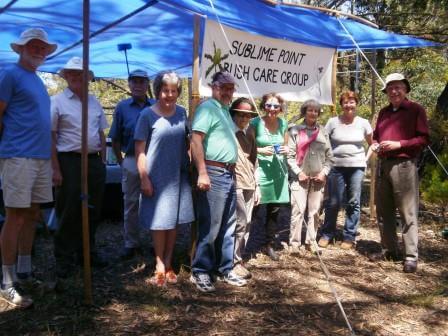 An Introduction to Eucalyptus

Eucalypts belong to the family Myrtaceae, one of the major plant families with about 70 genera in Australia. The name comes from the Greek myron meaning perfume and refers to the characteristic smell of the family.

The genus name Eucalyptus comes from the Greek eu, well; and calyptos, covered; and refers to the bud cap covering the flower.

Angophora comes from the Greek angos, jar; and phoros, bearing; alluding to the cup-like fruits.

Corymbia is from the Latin corymbus, meaning a cluster of flowers.

There are well over 800 species of Eucalyptus. Most are endemic to Australia, about 8 species growing in New Guinea. As new species are discovered, or present species split, 800 is a very conservative estimate. In fact there are probably over 900 species.

The first specimens were probably collected by Banks and Solander in 1770. Corymbia gummifera collected from Botany Bay was originally called Metrosideros gummifera by Solander. Banks was the first person to refer to eucalypts as “gum trees”.

Although many species were collected by various expeditions it was not until 1788 the genus Eucalyptus was first named. Charles Louis L’Heritier de Brutelle, who had never seen them growing in their natural state, called a specimen collected from Tasmania on Cook’s third voyage, Eucalyptus obliqua.

The Blue Mountains World Heritage Area contains well over 100 species and the diversity of the eucalyptus genus was one of the reasons for world heritage nomination. There are probably about 60 species in Blue Mountains National Park. Some species are common, others extremely rare and restricted to small areas.