Think of your favourite animal. Can it breathe through its skin, clean up after others or predict the weather? We’re guessing not. NPWS are sharing six of the many reasons we should all be a little more appreciative of these tiny eco-powerhouses.

Frogs have a thin, permeable skin which lets liquids and gasses pass straight through. This thin skin is also very sensitive to temperature, sucks up pollutants and toxins, and absorbs water – removing the need for frogs to drink. These unique qualities make frogs superstar bioindicators, which means that scientists can use data gathered from frogs to get a better understanding of an ecosystem’s environmental health. Because frogs live in water as well as on land, they can provide an indication of both habitats.

2. Frog song is music to our ears

If you’re lucky enough to hear the call of frogs where you live, it’s usually a sign that you are living in a healthy and unspoilt area. Each species of frog has its own unique call, so it’s possible to check what types of froggies live in your backyard just by listening carefully (or downloading the FrogID app).

When frogs detect drops in atmospheric pressure (yep, they’re that clever) – an indication of impending rain, they’ll begin croaking, giving the Bureau of Meteorology a run for its money!

Where and when can we hear frogs? There’s no hard-and-fast rule for all frogs, but they like to breed near water, so listen out for them around dams, wetlands and ponds, or after rain. Many frogs call during their spring and summer breeding seasons, while some only call during autumn and winter and others will call all year-round. Most Aussie frogs are nocturnal and won’t start croaking until after dusk, but this isn’t the case for all frogs, especially during wet weather. When you’re in a NSW National Park, you may just come across the Brown striped frog with its distinct ‘tok’ call or the Peron’s tree frog, with the male’s drill-like call it’s often described as a ‘maniacal cackle’. Reminder: a good rule with all wildlife is to stay on track and keep your distance. Frogs are good to spot not to touch.

Tadpoles act as nature’s pool cleaners, feeding on the algae that forms in ponds, creeks and puddles. While the tadpoles enjoy a delicious feast, algae levels are kept under control, filtering our water and keeping it clean – and they don’t even charge for their waste-management services. When we lose frogs in waterways, we will notice that water quality declines and water courses become clogged up.

4. Frogs are an irreplaceable ring in the food chain

Frogs play an important role as both predators and prey in the food web. Frogs’ diets consist of large quantities of insects, including pests, helping to keep population sizes of these unwanted critters at bay. Frog eggs provide food for insects, like spiders and wasps, while tadpoles fill the bellies of fish, birds and some insects. With a wide range of birds, mammals and reptiles relying on adult frogs for food, their disappearance would drastically affect entire ecosystems.

Without frogs as predators, populations of mosquitoes, which are carriers of disease, will increase. Having frogs around can help to keep mosquito-transmitted diseases, like dengue and malaria, from spreading to humans.

6. Australia has one of the world’s most diverse ranges of frog species

With more than 200 native frog species, Aussies are fortunate to have such a varied range of frogs living and croaking in our own backyards. More than 80 frog species are found across NSW in a range of environments, from rainforests and mountains to deserts. Sadly, eight species of Australian frogs have become extinct in the last 25 years and 30 frogs are currently listed as threatened in NSW. Pollution in our waterways, introduced fish species, loss of habitat and Frog chytrid fungus – which has led to the decline in frogs worldwide, are some of the threats putting our precious frogs at risk of extinction.

Why not keep in touch with the Citizen Science Frog Search NSW – a combined research and citizen science project studying 3 threatened frog species in the Blue Mountains World Heritage Area. The Blue Mountains Frog Search Citizen Science program aims to monitor three key threatened frog species around the Blue Mountains region using acoustic data loggers. These data loggers will be installed near waterbodies across various sites and allow for the detection of frog species using their unique calls. As part of the project, Citizen Scientists have the opportunity to manage an acoustic data logger (including installation, maintenance and retrieval), as well as learn how to identify the unique calls for each frog species and analyse the data collected. Training will also be provided in the use of mobile phone apps, such as iNaturalist and FrogID. Online training is currently being provided via Microsoft Teams, however, this will be extended to include face-to-face workshops and field trips in the coming months. If you are interested in becoming involved in the project or would like to know more, please contact Alana Burton at Alana.L.Burton@uon.edu.au or on 0448 462 004. Feel free to check the “Frog Search NSW” Twitter or Instagram accounts.

Council will be hosting some Fauna talks prior to the quarterly Bushcare Network Meeting.

Talk 1: Anne Carey from Applied Ecology will be presenting…. the Blue Mountains Fauna Inventory (e-Launch) which lists all the species and where they are likely to be found based on past records which can be downloaded from the Council’s website.
Talk 2: Frog Conservation Science Citizen project – Are you interested in becoming involved in monitoring threatened frog species, do you know locations with good frog populations or interested in the threat and decline of our frogs in the Blue Mountains then come along to listen to Alex Callen from the University of Newcastle.

One person is attending Fauna Talks and Bushcare Network Meeting 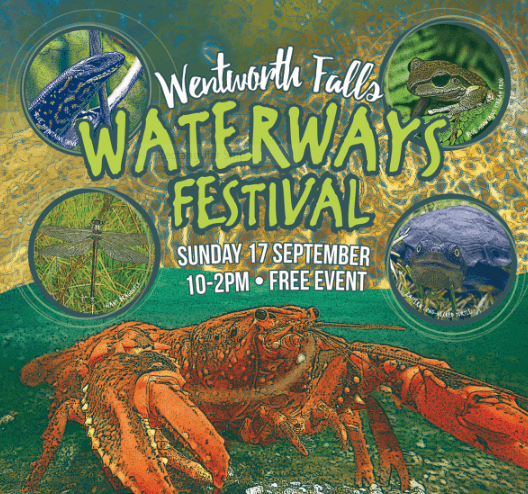 Bring the family to Wentworth Falls Lake on September 17 to discover more about our local waterways and the
creatures that live there. Our creeks, rivers and lakes are part of what makes the Blue Mountains so special. They are home to unique animals such as giant dragonflies, turtles, water-skinks and much more. Come along and learn about who lives in and around the water, and what we can do to look after them. Meet a crayfish, listen to stories, explore a swamp, create some art, make a difference!