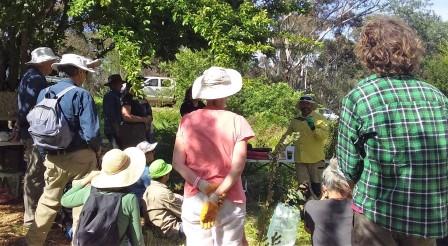 It was a great success, with a wonderful community feel and a great boost to The Upper Kedumba Bushcare site, with so many enthusiastic and committed helping hands we also had 5 new volunteers join in.

After a full work morning we indulged in a wonderful shared feast and heard from Eric Mahony about works in the catchment and how our workdays positively impact on it and Jane about our Bushcare native bee metropolis and who we would likely see using the bee hotels.

We were working on 4 different site components, giving a variety of work options to the volunteers so they could join in with tasks to challenge them and also tasks where they would feel familiar and relaxed.

Our work day consisted of

1 – Continuing to create a wetland soak in the low lying section of Upper Kedumba, to change the environmental conditions currently present, trying to create a wetter area hoping to diminish annual grasses and create more habitat for aquatic critters, whilst slowing the flow of the water in big rain events capturing it on site , and stripping nutrients from it. 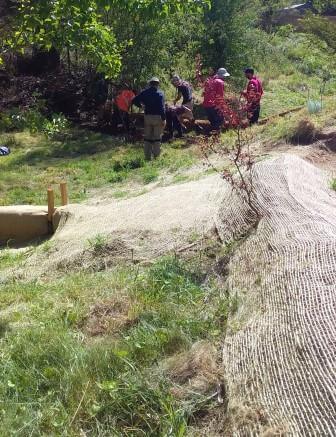 2 – Continuing on with a creation of a mulch path through the site – The long-term vision is to create a site where local community will feel inclined to walk through it and stop and find out about local native bees, fauna and habitat creation and why these things are needed and how important they are in our local environment.

3- Removal of small and large privets in bands across the slope – this work will be supported by a day of contracting works in the next 3 months and continued planting of endemic species.

4- Removal of Montbretia from a drainage line. 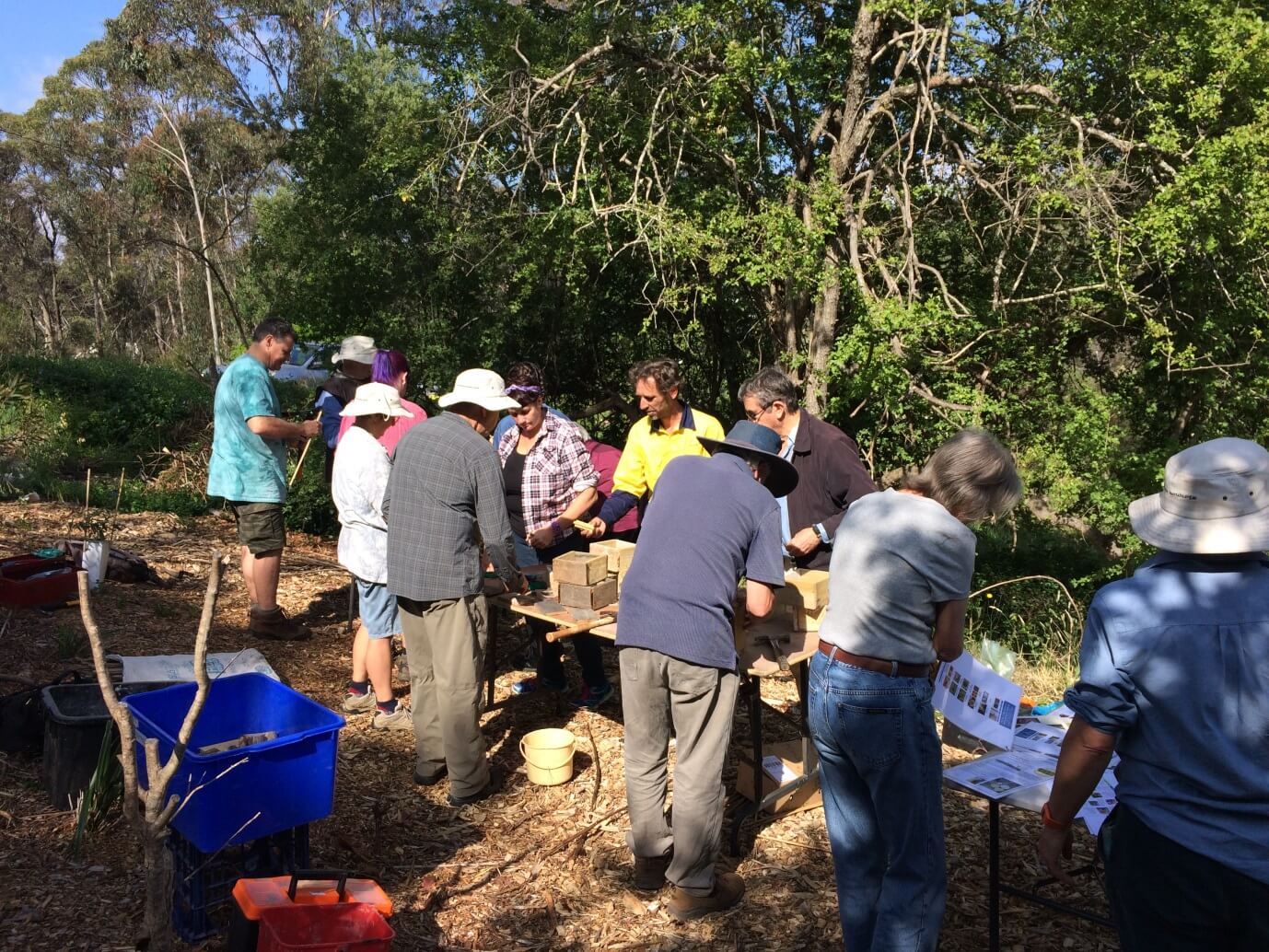 Upper Kedumba Bushcare group hosted a pollinater habitat (Bee Hotel ) making workshop. Three types of habitats for different bee species were constructed and installed in appropriate places around the site. A simple hanging Bamboo home , an elegant bee box with asorted materials and entry sizes to enhance habitat variey and a sturdy mud home with besser blocks for ground dweling bees, such as our favorite, the Blue Banded Bee.

Some participants also made smaller versions to take home. The group reports that those installed on site already have evidence of happy occupants – within the month !! David Rae installed his “Bee Hilton” which he constructed prior to the day, and reported that he advanced his knowledge of the subject through the workshop. “The production of the clay infill for the blocks was a very useful exercise I think. I have since played around with this at home using a mix of Builders Clay, sand & soil” he said. 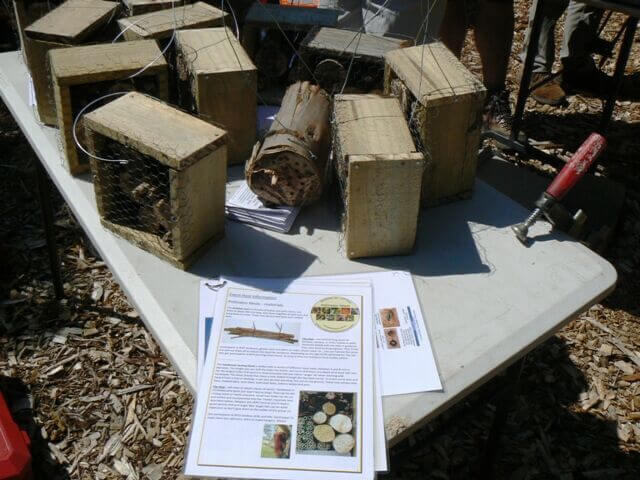 Philip Nelson spent many hours preparing for the day and having materials ready so the group could simply construct and has written out a comprehensive “how to” information sheet. His advice to those planning a similar event is to construct some hotels first to work out what is best done prior to the day and what are the most suitable tools and materials to use.”

Central Parks Jo Goozeff found a lovely simple way to construct 4 bee hotels out of a hard wood log , these were quickly inhabited by resin bees , cuckoo and mud wasps all fantastic pollinators. 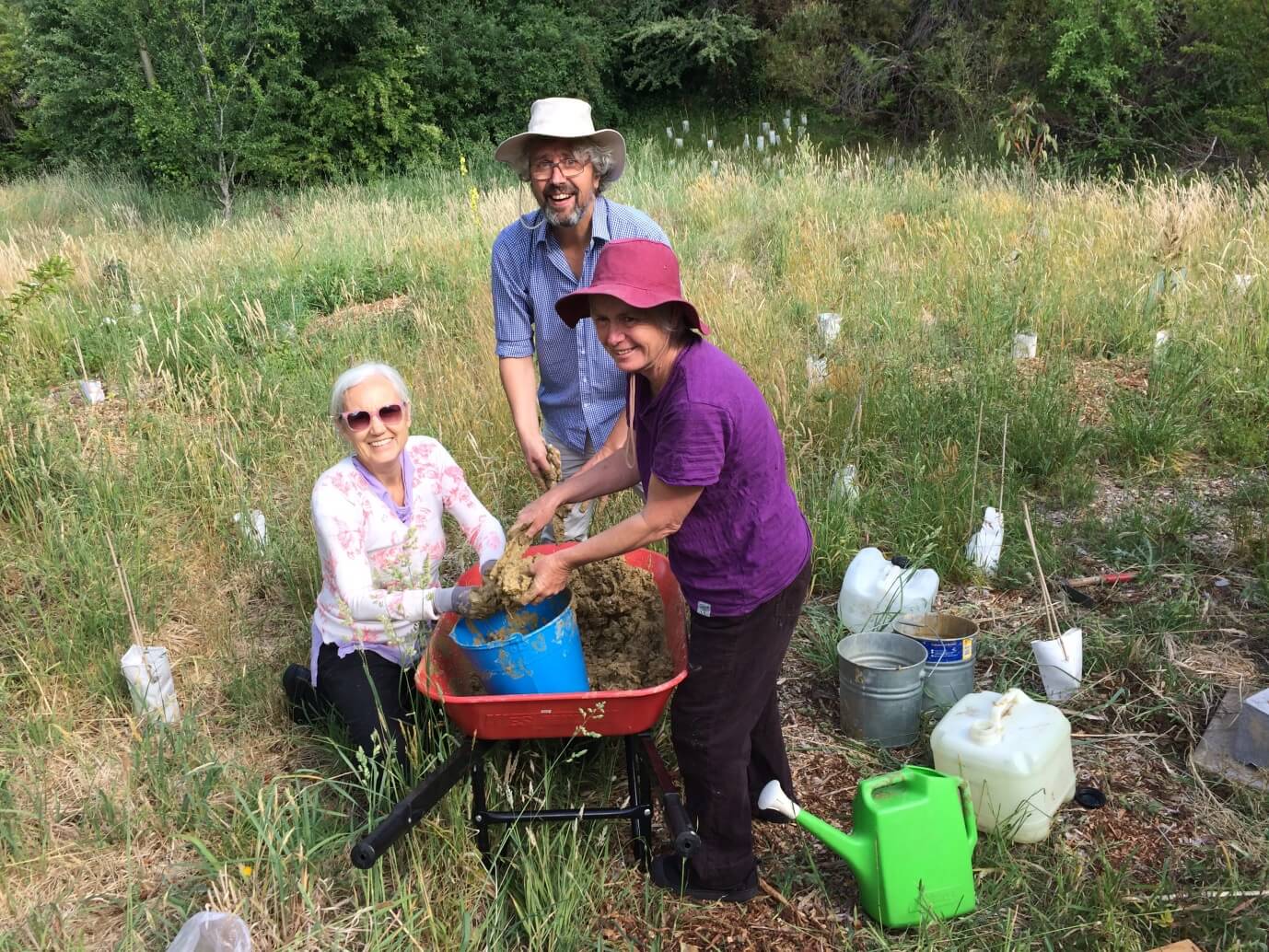 The Birriban Landcare students spent 3 months planning, preparing and making 5 very beautiful bee hotels. The day of installation was marked with a ribbon cutting by a group of school dignitaries and the planting of bee friendly plants in the Birriban habitat garden. Cheekily promoted as “the biggest hotel opening The Blue mountains has seen” the installation warranted an article in the Blue Mountains Gazette.

Leura Public School Swampcare Group celebrated Pollinator week by constructing a mixed material bee hotel in the bushland behind the school. Four students re-used an old wooden Antechinus nesting box as the hotel’s foundations and filled it with lengths of bamboo, various widths of holly stems (previously cut from the site) with holes of various widths drilled into them, tree fern stalks and eucalyptus bark. The hotel was then mounted on a cut stump of dead holly, making further good use of the weeds on site. 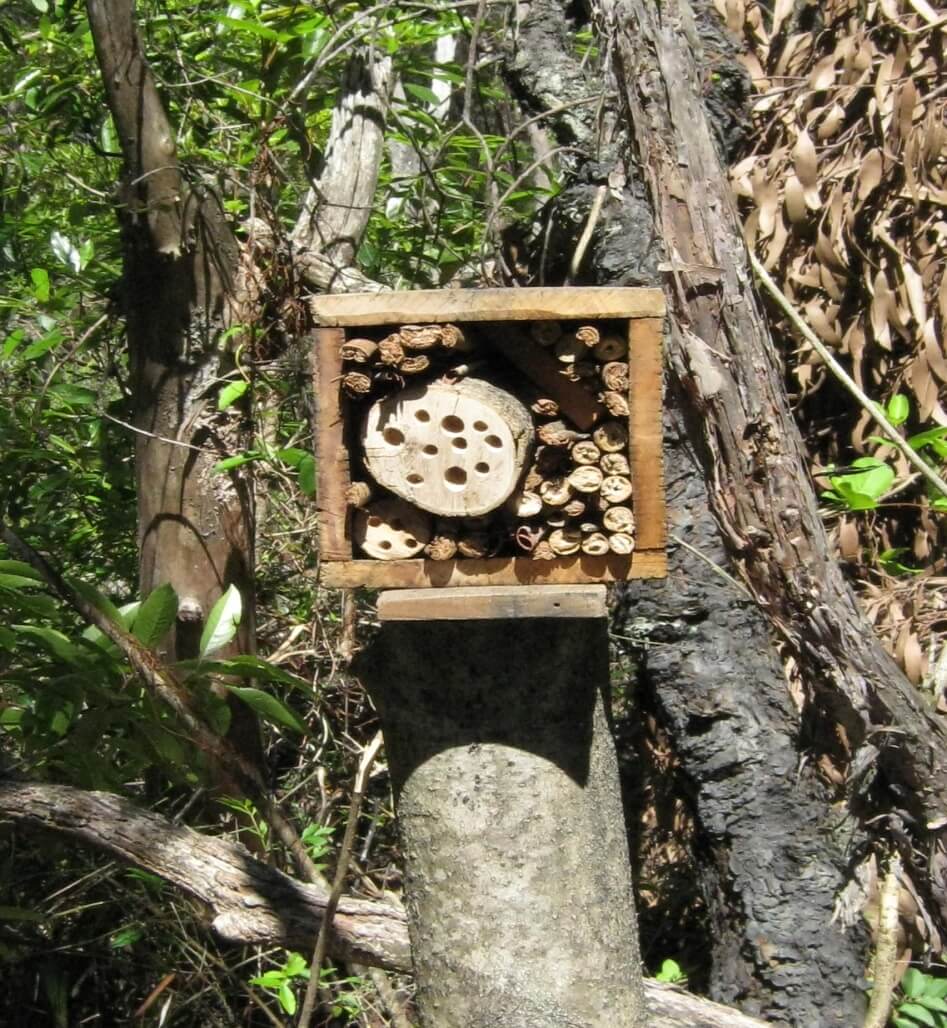 Pollinator week participants were surprised to learn that not only do native bees exist, but we have so many species (over 1500) in Australia. Like most people, the only bee species they were previously aware of was the European Honeybee and while honey is most appreciated, the role played by other pollinators is critical to a well-functioning ecosystem and crop production.

In September 2012 the Bushcare Groups that work in the upper catchment of the Kedumba River — The Gully — Katoomba, held their first annual Combined Catchment Day. The purpose was  to enable all the groups in that water catchment (the area that catches the rain water that drains over Katoomba Falls into the Kedumba River) to come together to meet each other, find out what other Bushcarers are up to and do some Bushcare together. END_OF_DOCUMENT_TOKEN_TO_BE_REPLACED