The Blue Mountains Bushcare Network proudly to presented their third Bushcare Network Conference on Saturday July 29. This year theme is Citizen Science so a Bioblitz seemed appropriate! The day focused on our beautiful and unique lower mountains vegetation communities. We were fortunate to be able to spend the day with experts to learn how to be “ears and eyes” on the ground. The data we collected will go into data bases for a wider audience.

Concurrent sessions occupied the morning. They included field-based citizen science activities at various locations around Springwood and two presentations at the Hub: 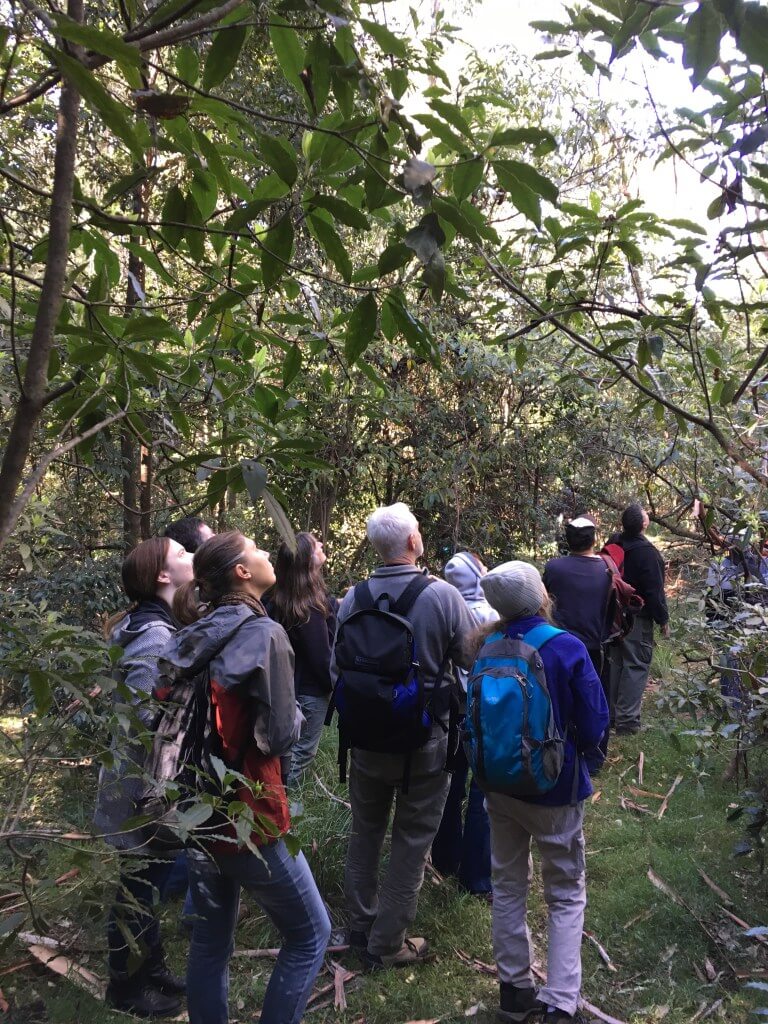 We all reconvened at the Blue Mountains Theatre and Community Hub in Springwood for lunch, informative and inspiring presentations from Margaret Baker and Jenny Hill, and hands on workshops including what to do with the data we collect.

Margaret’s talk introduced the endangered eucalypt forests (Threatened Ecological Communities) that are found on clay soils of the Lower Blue Mountains from Springwood to Hawkesbury Heights and to Lapstone. She described each of the communities, identified the main trees and talked about some of the rare plants, but the focus was the diversity of birds to be found in each of the forest types, especially birds that are listed under NSW legislation as Threatened.

Citizen science has emerged as a distinct field over the last 20 years and is now enjoying a boom. What are some successes? What are the factors critical to its success and what role does Bushcare, Landcare and Swampcare play in this success? How could citizen science grow to be part of the bigger story about restoration and protection in the Blue Mountains? This is brief overview of citizen science is an introduction to group presentations.

In her community volunteer role Jenny Hill is Coordinator with the Leura Falls Creek catchment working group, Bushcarer and Streamwatcher. Jenny has been involved in environmental education and learning for over 35 years and is currently Environmental Educator for Blue Mountains City Council. In this role she conducts citizen science and connects with nature programs across the mountains with schools and community groups. Jenny’s on-ground experience enriched her presentation and provided the bigger picture of citizen science in many different contexts.

Introduction to Biodiversity Atlases on the Internet – Margaret Baker

This talk provided an introduction to the biodiversity atlases that are available on the Internet. It focused on the Atlas of Living Australia – where to find it, how to use it to determine biodiversity in a selected area and how to record data as an individual or as a Citizen Science group. It showed how the kind of data collected in the field sessions of today’s conference can be readily entered into the global exchange of biodiversity information. The world-wide and unrestricted access to such information can however be problematic and so some issues related to atlas and database use was also be discussed.

The 10 year anniversary of Blue Mountains City Council’s Swampcare and Save our Swamps Program was celebrated at a Swamp Symposium recently that highlighted the significant and award-winning achievements of swamp restoration in the Blue Mountains.
The one-day conference, which attracted 65 attendees, highlighted dedicated Swampcare volunteers who have contributed over 10,000 hours towards protecting Blue Mountains swamps.
Mayor, Cr Mark Greenhill, said the award-winning approach to swamp restoration is part of Council’s whole of catchment approach to environmental management.

Blue Mountains Swamps are a biologically diverse plant community that occurs nowhere else in the world. The vegetation in these swamps range from low button grass clumps to large shrubs such as the Hakea and Grevillea species. The swamps provide essential habitat to several Threatened Species such as the Blue Mountains Water Skink (Eulamprus leuraensis) and the Giant Dragonfly (Petalura gigantea).

In 2008 Blue Mountains and Lithgow City Councils formed a partnership to deliver the ‘Save our Swamps’ (S.O.S) project to restore the endangered ecological community across both local government areas. The project was supported by grant funding of $250,000 over 3 years from the Urban Sustainability program of the NSW Environmental Trust.

In 2009 the S.O.S. project received a $400,000 Federal Government ‘Caring for Country’ grant to expand the program to incorporate Wingecarribee Shire Council and Gosford City Council. The partnership resulted in the swamp remediation model being rolled out to over 95% of the endangered ecological community in the four local government areas.

The innovative integrated approach led to the project receiving four awards, including a special commendation in the United Nations World Environment Day Award for Excellence in Overall Environmental Management in 2011.

Speakers at the conference included Palaeoecologist, Dr Lennard Martin, who spoke on the ancient origins of swamps and Principal Scientist at the NSW Office of Environment and Heritage, Martin Krogh, who discussed the health of Newnes and Woronora Plateau Swamps.

Eric Mahony and Amy St Lawrence from Council’s Environment and Culture Branch also gave presentations. The day finished up with a field trip to the new soft engineering stormwater structures installed at the Leura catchment. 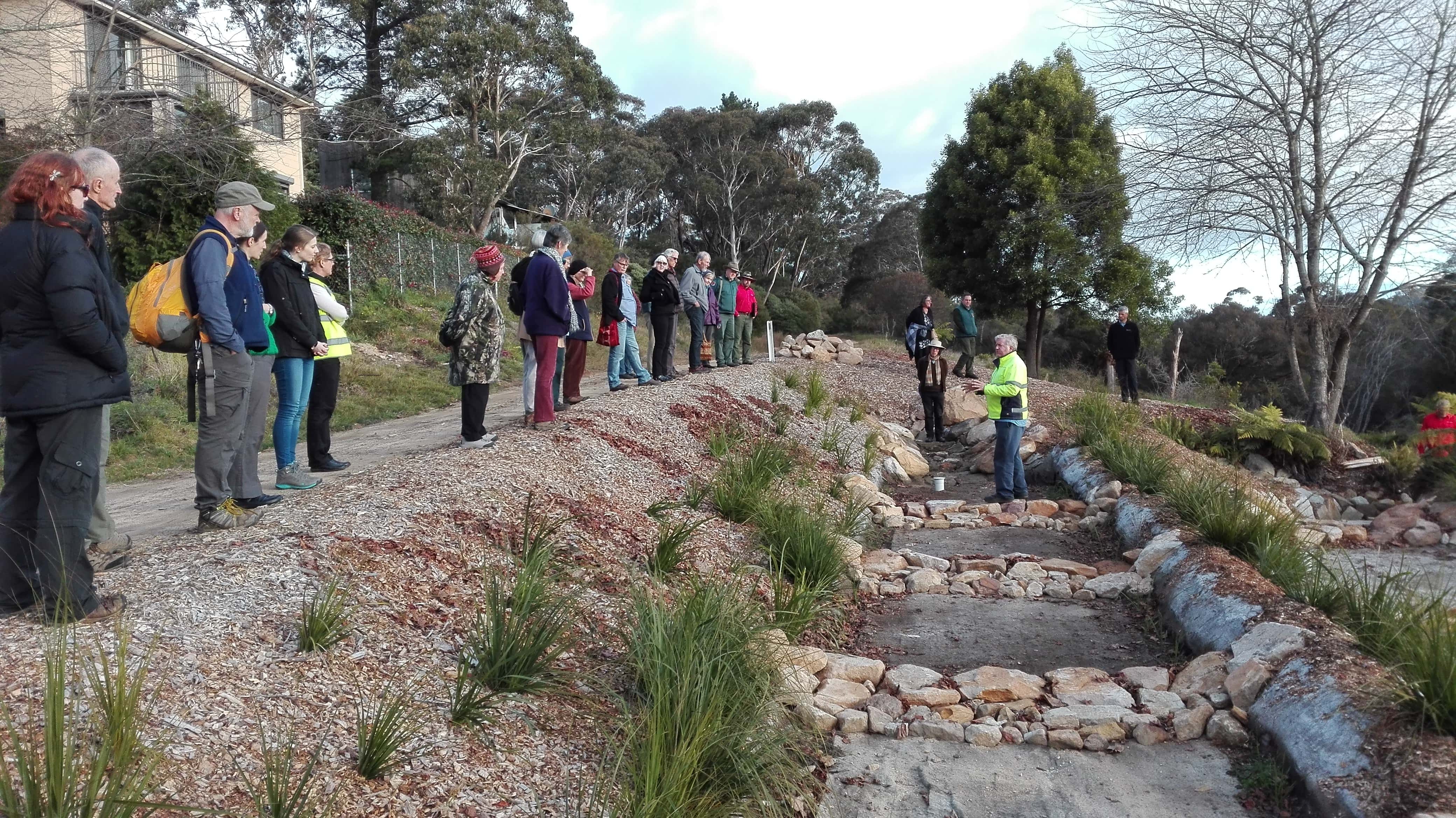 The Swamp Symposium was made possible by funding from the Office of Environment and Heritage ‘Save Our Species’ program, the new NSW Environmental Trust funded ‘Swamped by Threats’ project and Council.

Interested in Swampcare? Get involved by emailing schew@bmcc.nsw.gov.au or call the Bushcare office on 4780 5623.

Aunty Sharyn Hall welcomed us on behalf of the Gundungurra nation, with great warmth and positive messages. Our Mayor, Councillor Mark Greenhill opened the conference, taking the opportunity to remind us of the importance of maintaining the environmental protections offered by the draft 2015 Blue Mountains Local Environment Plan (LEP), and bringing us up to date with the efforts being made by the current Council to fight any watering down of the LEP. 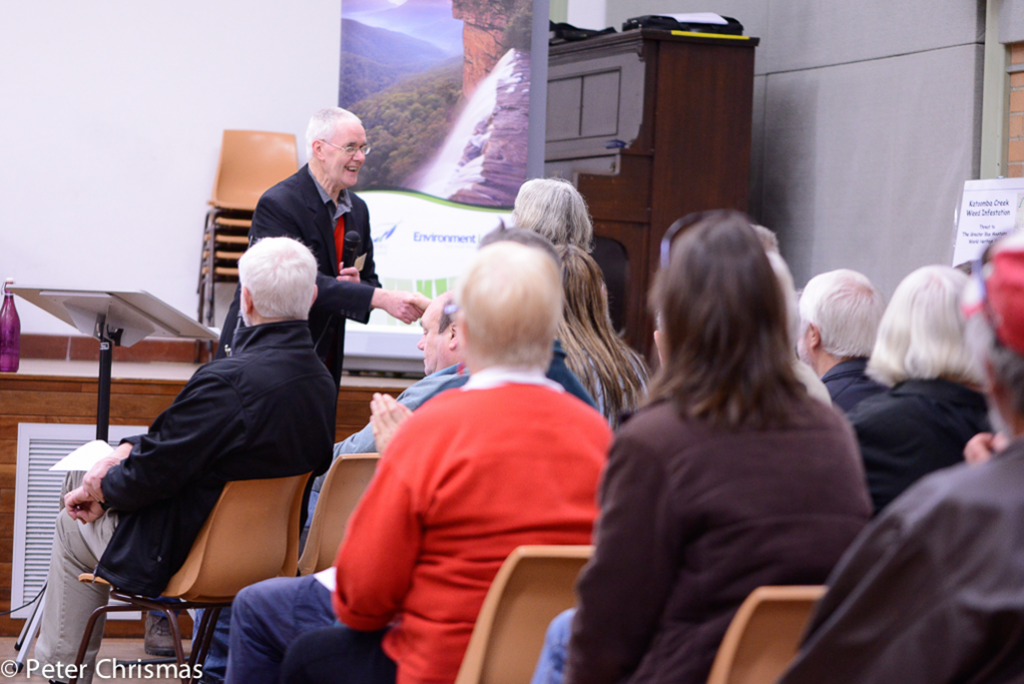 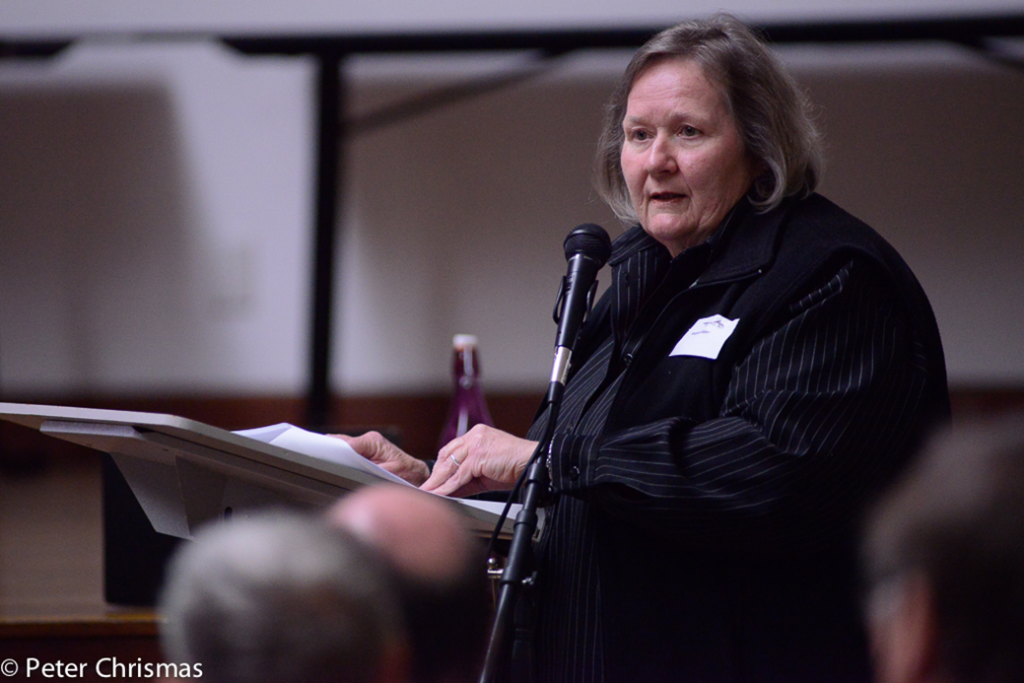 Margaret Baker generously donated her time and expertise once again 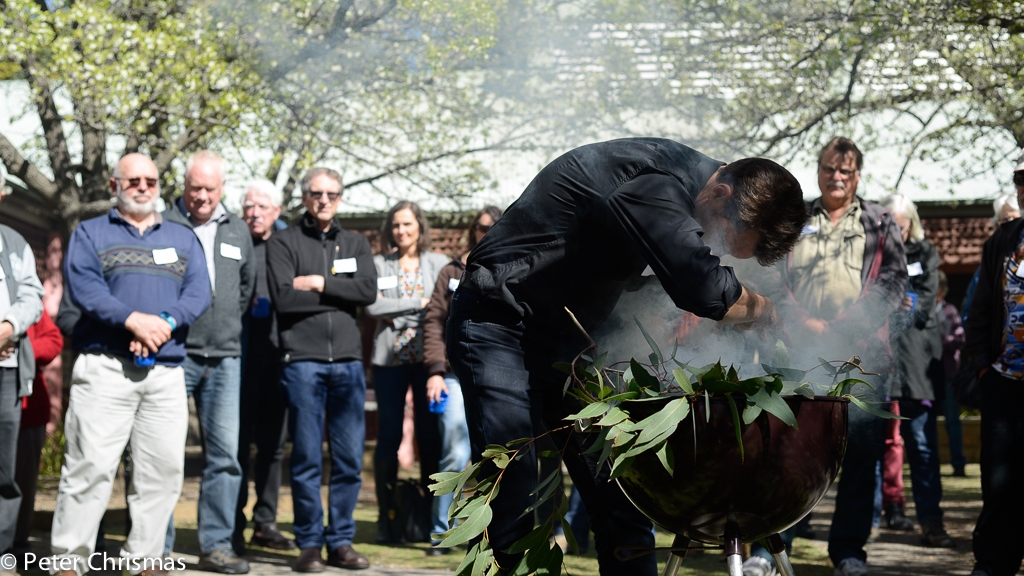 A highlight was undoubtedly a fabulous Smoking Ceremony which Den Barber of Blue Mountains Firesticks very generously conducted at very short notice. Due to the built nature of the surrounding environs, Den conducted the ceremony from a kettle barbecue!

After lunch,  during which the newly formed “Trad” band performed several weed-related numbers, delegates had a difficult choice to make: Den Barber’s presentation on Blue Mountains Firesticks, about Indigenous Cultural Burning, or Mark Graham’s about the Nature Conservation Council’s Hotspots project. Both delivered important and interesting information which was well received by participants and inspired much discussion.

And to cap off, the raffle was drawn, with several lucky participants winning some fabulous donated prizes, including a two night stay in a Katoomba B&B, a carton of wine, books and tools!

Presentations will be available on the Bushcare Network webpage http://bushcarenetwork.bushcarebluemountains.org.au/ and we will alert you when they are posted.

Greater Sydney Local Land Service still has a few free tickets left  for volunteers to attend the NSW Landcare Conference  to be held in Orange 1–3 September 2015. Recipients will need to organise their own travel and accommodation however opportunities to car share are likely.

Find out more about the NSW Landcare Conference, click here.